Connor Doak is a lecturer in Russian at the University of Bristol. He is grateful to Ritsuko Kidera of Doshisha University for advice on Japanese culture when preparing this piece. This piece originally appeared on All the Russias, the blog of the NYU Jordan Center for the Advanced Study of Russian, and is reproduced here with their permission.

Many of us who share a love for nineteenth-century Russian literature have found a recent fix of television drama in the BBC’s sumptuous adaptation of War and Peace. My tastes, however, have always leaned toward Dostoevsky rather than Tolstoy, so I put the BBC drama on the back burner while I finished a 2013 Japanese adaptation of Brothers Karamazov, now available on DVD with English subtitles. This award-winning eleven-part miniseries relocates the action from nineteenth-century Skotoprigonevsk to twenty-first century Karasume, a fictional provincial town in Japan. The popular series provides a case study in how Dostoevsky has been indigenized for a contemporary Japanese audience. Moreover, it is fascinating to observe how this miniseries is influenced by recent trends in televised crime drama, a genre that, of course, had its origins in nineteenth-century literature, and to which Dostoevsky’s own novel made an important contribution some 150 years ago. 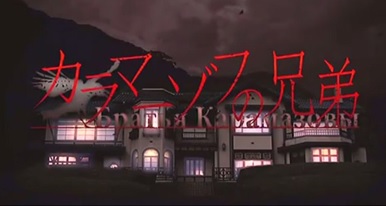 Even more than Dostoevsky’s novel, the miniseries highlights the family conflict at the heart of the story. The Karamazov family become the Kurosawas. This name offers a nod to the great Japanese director whose 1951 adaptation of The Idiot remains a classic, but its Japanese meaning—“black swamp”—also reflects the family name Karamazov’s connection to blackness. The terrifying presence of Bunzo Kurosawa, the Japanese incarnation of Fyodor Pavlovich, looms over the entire miniseries. Veteran actor Kotaro Yoshida’s wealth of experience as a Shakespearean stage actor shines through in his portrayal of the consummate villain, complete with maniacal laughter. It is difficult to forget him as, even once murdered, his grotesque image lingers through a huge portrait that dominates the interior scenes of the Karamazov house, and, of course, frequent flashbacks provide ample opportunity to add to his screen time. 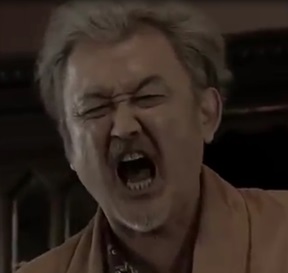 Yoshida’s hyperbolic performance fits with the overblown aesthetic that characterizes the series as a whole. This mood is enhanced by gothic-inspired cut-scenes featuring sinister crows, as well as an emotionally laden soundtrack that mixes late Romantic composers (Grieg, Ravel, Tchaikovsky) with angry rock (Led Zeppelin, Lou Reed, Nirvana). “Paint It Black” by the Rolling Stones, with its tones of frenetic desperation, provides a fitting anthem for the series. At times, the program overindulges in this dark aesthetic, risking becoming a parody of itself. Perhaps that danger is particularly present for European audiences, whose taste in crime drama is currently more attuned to Scandi crime dramas. Nordic noir, though it deals with equally gruesome themes, tends towards a slower pace, bleaker, sparse settings, and more restrained performances. Yet for the viewer equipped with knowledge of Dostoevsky’s source text, the over-acting and heavily charged atmosphere appear as an asset in the Japanese miniseries, since these features have direct equivalents in the novel.

As in the novel, the miniseries opens with a reunion of the family. The father’s murder soon follows, leaving the audience wondering which of the brothers committed the crime. Even those familiar with the book are drawn in, as we wonder whether the adaptation might yield a different killer than the novel. The miniseries switches between different time periods: the lead-up to the murder, its aftermath, and the boys’ traumatic childhood. This editing technique creates a fragmentary narrative, inviting the audience to piece together the sons’ long-term resentment of their father as well as the events on the day of his murder. Though long familiar to viewers of crime drama, this device proves poignantly effective for an adaptation of Brothers Karamazov, as it allows for an exploration of the power of memory, so important to that novel. 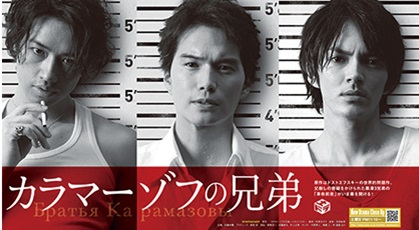 Modern-day analogues are found for each of the three brothers, with varying degrees of success. Dmitry’s equivalent is Mitsuru (Takumi Saito), whose brooding good looks make him attractive to women, but who is struggling with debts and alcohol abuse. Perhaps the best performance comes from Hayato Ichihara as Isao, the counterpart for Ivan. His success not only stems from the fact that Isao has all the best lines—as many would argue Ivan does—but because Isao’s role as a lawyer proves an apposite twenty-first century equivalent to the questioning skeptic found in the novel.

It proves more difficult to find a modern-day analogue for Alyosha, the novice monk. He becomes Ryo (Kento Hayashi), a student of psychiatry, his kind spirit channeled into medicine rather than Christian virtue. As Ritsuko Kidera, a Dostoevsky specialist at Doshisha University, points out, Japanese versions of Dostoevsky have historically tended to play down the writer’s Christian themes because of the difficulty of finding cultural equivalents. Zosima’s role is even more difficult to reproduce. Although the early episodes feature a university tutor whom Ryo much admires, the character and his values are not articulated strongly enough to provide the same presence that the Russian monk offers in the novel.

It is, in fact, the social rather than the religious dimension of the novel that this adaptation foregrounds. The tyrannical patriarch Bunzo, a corrupt and uncompromising entrepreneur has bought up a good portion of the town of Karasume. According to the creator of the series, Misato Sato, Bunzo is “a relic of the bubble economy of the 1980s” [1]. The dark side of economic growth is explored through a recasting of the subplot involving Snegirev, who is reimagined as a petty businessman whom Bunzo destroys financially by enlisting the help of his lawyer son Isao. Here the series points to the collusion of the law with big business, showing how Dostoevsky’s text can be repurposed as a critique of capitalism for our contemporary era of recession. 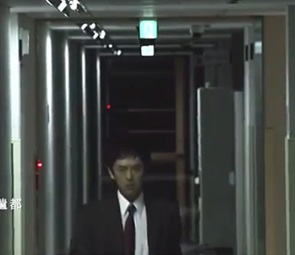 The police investigation occupies more space in the miniseries than in the novel. The idea of universal responsibility, arguably the novel’s central theme, is not entirely neglected, although it takes a back seat to the exploration of policing and justice in the miniseries. The detective’s assumption of Dmitry’s guilt echoes the social determinism of the prosecutor in the novel. The law is presented as coldly calculating and rational. Although the lead detective is not as wantonly cruel as the patriarch Bunzo, the system that he represents is almost as heartless.

Nabokov derisively called Dostoevsky’s Brothers Karamazov “a typical detective story, a riotous whodunit—in slow motion” [2]. This assessment purposely fails to mention all the ways in which Dostoevsky reworks the tradition of the whodunit: his questioning of human justice, his exploration of free will and determinism, and his Christian ethics, to name but a few. Although the miniseries does not attempt to replicate the full range of Dostoevsky’s philosophical inquiry, it, too, is more than a “riotous whodunit” on the small screen. The series not only uses Dostoevsky’s text to create an entertaining crime drama, but also as the basis for an inquiry into the psychology that accompanies the current socioeconomic moment in contemporary Japan.