Michael Marsh-Soloway is a PhD Candidate in the Department of Slavic Languages and Literatures at the University of Virginia.

At the end of the fall 2015 semester, Russian language students in the UVa Slavic Department held two performances of F.M. Dostoevsky’s “The Crocodile.” The first was held at the Jefferson-Madison Regional Library in downtown Charlottesville on Saturday, December 5, and the second was staged in the Nau Hall auditorium on Wednesday, December 9. The all-student cast recited dialogue in Russian, but English subtitles were also projected above the stage so that non-Russian speakers could follow the action of the play. The UVa College Council and Department of Slavic Languages and Literatures generously provided support to the production, allowing both performances to be free and open to the public. About 120 people attended the two shows, and the audience included university students, faculty, staff, and members of the local community.

First published in Dostoevsky’s journal Epokha in 1865, the short story was not originally intended for the stage. Sensing that the short farce and its humor would readily translate into theatrical comedy, two PhD students in the UVa Slavic Department, Michael Marsh-Soloway and Abigail Hohn, worked closely throughout the semester to adapt the satirical farce into a 15-page script. After visiting Russian-language classes at the start of the semester, they recruited an enthusiastic cast of 15 students and commenced holding rehearsals on a weekly basis starting in late September. The students in the cast all assisted with making props, costumes, and set décor. Maria Bakatkina, a native speaker of Russian in the 4+1 BA and MA program in Slavic Languages and Literatures, provided special phonetics instruction to members of the cast, while Michael and Abby addressed questions regarding grammar, syntax, and the semantic meaning of lines conveyed in the dialogue and stage direction of the play. In addition to writing the script and fielding Russian language questions about the script, Michael and Abby co-directed the production. 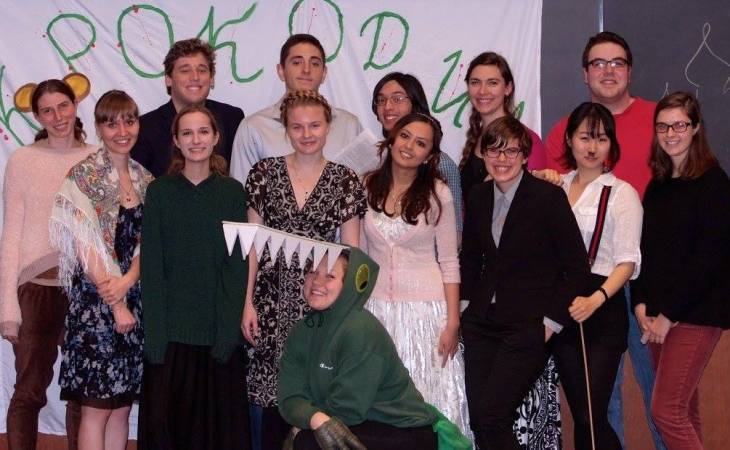 Video recordings of the “The Crocodile” are on YouTube: