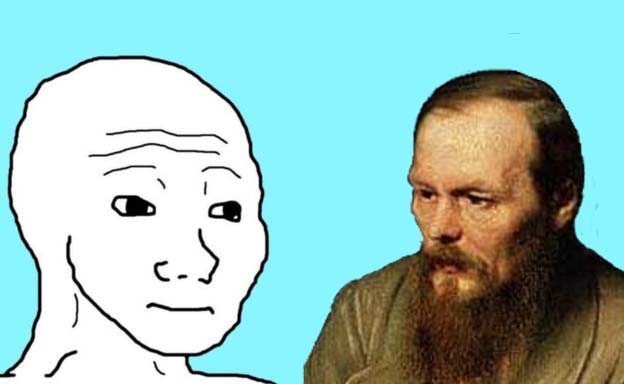 The following blog post emerged from a roundtable on “Teaching Dostoevsky in the 21st Century” organized by Daniel Brooks at the 2019 AATSEEL conference in New Orleans. This is the second in a series of posts by roundtable participants. The first in the series can be found here.

No shortage of contemporary horrors were prophesied by Fyodor Dostoevsky’s works: The Brothers Karamazov presages totalitarianism; Demons—terrorism; Diary of a Writer, the author’s ongoing, raw, dialogic polemic—Twitter. Although the author’s shorter, less ambitious texts are rarely accorded such powers of prognostication, few of his writings seem more urgent than the modest novella The Eternal Husband, which presents an object lesson in the toxicity of modern masculinity and homosocial desire.

The plot of The Eternal Husband is simple; its characters less so. Velchaninov, a preening, self-deluded cad, was once involved with the now-deceased wife of Trusotsky, whose daughter, Liza is likely the product of this adulterous affair. Liza’s abuse at Trusotsky’s hands suggests his shameful knowledge of her true parentage; she dies under another person’s care. The widower Trusotsky, eager to remarry, strangely asks Velchaninov to approve of his would-be fianceé. After a night of drinking, Velchaninov awakens to find Trusotsky standing over him with a knife; Velchaninov subdues him, although Trusotsky quietly leaves of own accord next morning. The epilogue finds the two characters repeating the same patterns years later: Trusotsky is married to a woman with a wandering eye, and Velchaninov is on the prowl.

It is the discourse through which this adultery plot is refracted that resonates with our time, and makes The Eternal Husband ripe for discussion. Velchaninov coins the term “eternal husband” to characterize Trusotsky, a perennial cuckold before Velchaninov’s more virile type. With this phrase, Dostoevsky permits his character an idiosyncratic revision of critic Apollon Grigor’ev’s “peacable” (смирный) and “predatory” (хищный) Russian types. The more sexual nature of Velchaninov’s conceptual binary, coupled with his disdain for the women who “bedevil” him, portends modern online communities that trade in gendered male grievance: from Subreddits lambasting those who have been “blue-pilled” (cowed into accepting an unwarranted equality between genders) and lauding those who have been “red-pilled” (steeled against feminism’s insidious evils); to the devotees of Jordan Peterson, who bemoans the worship of “feminine chaos” and celebrates the promotion of “masculine order.” Velchaninov all but proclaims himself an “alpha” and Trusotsky (whose surname tellingly contains the root трус, coward) a “beta”; his coined phrase conceals the disdain expressed quite openly in “cuck,” the alt-right’s preferred epithet.

The passive fatalism suggested by the adjective in “eternal husband” has its echo in the now-ubiquitous term “incel” (a contraction of involuntarily celibate). Notwithstanding its more complex origins, the label has recently been appropriated by misogynist terrorist Alek Minassian, who on April 23, 2018 drove a truck into a Toronto crowd in order to murder women, foment an “incel rebellion,” and spite his alpha superiors—in much the same way that Trusotsky expresses anger at his unfaithful wife and her lover by abusing their daughter. Such violence by “betas” receives more nuance than its victims do: pickup artists claim that training in aggressive, misogynist courting rituals would have garnered incel terrorists sexual partners and relieved their murderous sense of failure; Jordan Peterson claims that their acts represent rebellion against a stingy god, and that society has an obligation to publicly shame the inversely promiscuous women who would deprive these violent men of a rage-soothing mate.

Dostoevsky’s text presents an additional pedagogical challenge in that it is focalized through Velchaninov’s “alpha” point of view. (The penultimate chapter is fittingly titled Анализ, Analysis, expressing the protagonist’s overweening assumption—à la Peterson—that he is the “logical,” “rational” actor in the story, telling hard truths about gender and society.) Trusotsky—by turns pathetic, revolting, and seriocomic—seems a difficult read to Velchaninov (and, perhaps, us). Yet he is not the aporia he seems, and Velchaninov’s puzzlement at Trusotsky’s actions is itself telling of modern-day homosociality’s lacunae.

Via Trusotsky’s seemingly contradictory actions, Dostoevsky’s text repeatedly suggests that the binary hierarchies which structure Velchaninov’s views—and those of Peterson, the “cuck”-obsessed alt-right, and the resultant Venn diagram between them—are flawed. In fact, the text’s twisted romantic dynamic reveals their fallbility. Renowned literary critic René Girard applied his theory of mimetic desire to a number of Dostoevsky’s works, demonstrating that his characters perform desires that have been previously exhibited—and thus preemptively sanctioned—by a third party. Desire becomes contingent rather than direct, expressed by a series of imitative moves that, in practice, destabilize the absolute hierarchy on which Velchaninov’s binary rests. When Trusotsky timidly requests his rival’s approval of his would-be bride, he seems a beta to Velchaninov’s alpha. But doesn’t Velchaninov’s perennial pursuit of married women reveal the same insecure need for prior approval? Isn’t Velchaninov’s incipient desire (“jealous, envious” according to the narrator) for Liza’s affection a sign of how easily Trusotsky turns his hated competitor into an obsequious imitator? Trusotsky’s actions might seem illegible to Velchaninov, but the former’s repeated usurpation of the latter’s dominant position speaks to how readily their fates can be reversed. Why learn pickup artistry and become an alpha if mimetic desire makes cucks of us regardless?

In the novella’s epilogue, Trusotsky abruptly, sorrowfully invokes Liza’s name. The girl has gone all but unmentioned in the chapters since her death—reflecting, at once, her true meaninglessness for Velchaninov and her status as the inscrutable Trusotsky’s secret shame. Dostoevsky asks us to remember Liza’s name in a world where she is treated as an empty object, the collateral damage in a war of revanchist homosocial desire. Trusotsky is not redeemed by his regret, but nor is Velchaninov’s narratively privileged perspective allowed to escape unscathed. In remembering the victim, exploding an untenable hierarchy, and undermining the bad-faith actor who forgets the former and promotes the latter, Dostoevsky presents an antidote to misguided, destructive expressions of sexual desire and competitive masculinity. Anne Dwyer has recently suggested that Vladimir Nabokov’s Lolita “captures something that is wrong with the time and place in which we live,” and that wresting these wrong things from a novel narrated by a charismatic abuser remains a vital teaching and reading exercise; might not we say the same of The Eternal Husband?

Daniel Brooks teaches Russian language and literature at Franklin & Marshall College. His current research focuses on twentieth-century Russian auto/biography, memoir, and literary criticism. He thinks that, in the 21st century, Dostoevsky would be an Extremely Online individual.

For an explanation of the cover image, click here.

One thought on “The Incels and the Injured: Dostoevsky Against Toxic Masculinities”