This past November two new translations of Crime and Punishment were published. Michael Katz’s translation came out with Liveright, a branch of W. W. Norton (link), with an introduction by Katz. Nicolas Pasternak Slater’s came out with Oxford University Press (link), edited and with an introduction by Sarah J. Young. In this series of posts, Bloggers Karamazov sits down with the translators to talk about the experience of translating Dostoevsky’s most famous novel.

BK: The act of translation puts you in intensely close contact with the text. Did you notice anything while you were translating that you had never noticed before? Did your perception of the novel shift in any way?

NPS: When I came to start my translation I had not read the novel for very many years. What I remembered was the skeleton of the plot, and an impression of a gripping but heavy, depressing, chaotic, episodic story. So translating it now enriched my perception in a great many ways. Let me pick just one – Dostoevsky’s humor. He is a brilliant humorist who sees the ridiculous in almost any sphere of life, and in this novel he plays with humor in the most diverse and unexpected situations. When the German Luisa Ivanovna has a verbal set-to with Lieutenant Gunpowder in the police office, their showdown is pure slapstick farce. The meeting between Dunia’s absurdly pompous suitor Luzhin and Raskolnikov’s family who soundly humiliate him is also richly comical, as well as important for the plot. But even the most tragic situations can be injected with comedy. The drunkard Marmeladov’s lengthy confession at the beginning of the novel is funny, with its swathes of biblical language and then the way he revels in his degrading punishment. Or there is the macabre but absurd scene near the end of the book where the demented Katerina Ivanovna drags her little children out into the street in ragged fancy dress to dance and sing for pennies. Even one of the most horrible moments in the whole novel, Raskolnikov’s dream of the horse being beaten to death, has its grim humor – the drunken peasant Mikolka makes himself thoroughly ridiculous when he desperately flogs and beats his little horse, harder and harder, in frustrated fury that he can’t get the poor beast to die.

MK: The Russian ear tolerates repetition – of long names including patronymics and certain words and phrases. As a translator I noticed the multiple repetitions in the text and had to decide whether they were semantically loaded and needed to be preserved in my translation, or whether they were dispensable and could be replaced by a synonym or a pronoun. Such decisions are not easily made: the translator has to rely on his understanding of the text and his own intuition. 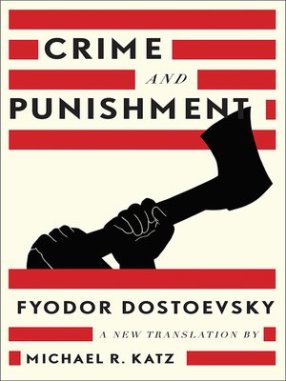 BK: Which character do you think is the most misunderstood in the novel?

MK: Without doubt, it’s Arkady Svidrigaylov. He appears out of a dream and his mysterious presence seems to haunt the hero. He is alleged to be responsible for the deaths of three other characters (his wife, his servant, and a young girl). He commits acts of cruelty and generosity, and feels neither compunction nor satisfaction. He seeks a relationship with Raskolnikov, but it is unclear why he does so. All in all, he remains something of a mystery.

NPS: I wondered – misunderstood by whom? The author, the other characters, or the readers? But I thought that the most universally misunderstood, perhaps, is Svidrigailov, the man of mystery with a shadowy past who hangs around Raskolnikov like a nemesis. On one reading, he is so enigmatic as almost to make no sense – is he fundamentally good (clearly not), or fundamentally evil (also not), and how do the good and bad sides in his character coexist? On the bad side, he may (or may not) have caused his wife’s death, he is a self-confessed libertine, he tries (or threatens) to rape Raskolnikov’s sister Dunia, and he plans to marry a child for his sexual gratification. Yet he performs many good actions, including saving Katerina Ivanovna’s orphan children and giving Dunia a large sum of money. Perhaps the last of his moral actions is to commit suicide. I think his character actually hangs together quite well: though repugnant, he is an intelligent man with a philosophical bent and humane instincts of empathy and kindness, who is saddled with sexual appetites that he can barely control. This is a paradox we meet often enough in real life (in this day and age, might he have been a charity worker in a third-world disaster area?).  Dostoevsky, of course, must condemn him because none of his humane motivations come from God or religion: he is an amoral freethinker.

BK: It’s interesting that you both chose the same character! Svidrigaylov is a scoundrel in many of his acts in the novel, and I agree that he remains a mysterious, ambiguous figure. Do you think he is a sympathetic character at all?

MK: He is “charming” and sincere in his despair; I don’t find him sympathetic.

NPS: I have already alluded to the good actions he performs, and while we may suspect his motives when he tries to make a gift of money to Dunia, and certainly when he makes a much more lavish gift to his (no longer) intended child bride, his farewell gifts to Sonia and her little brother and sister are untainted by sinister motives, and the reader is bound to approve of him at those moments. The slug in the lettuce, as it were, is not the action he performs, nor its intended good effect, but his inner thoughts at the time. He is a disillusioned cynic, a moral nihilist, and as a reader I cannot imagine him filled with a glow of virtuous satisfaction even during his most generous acts. No, he is looking at himself almost as an outsider, cynically weighing himself up and devaluing whatever looks virtuous and kind. There is no path he can take now save that of self-destruction. As a reader, I can feel sorry for him, I can feel glad about his good actions, but I cannot have fellow-feeling for such a self-annihilating person.

Michael Katz is the C. V. Starr Professor Emeritus of Russian and East European Studies at Middlebury College. His published research includes numerous articles and two books, The Literary Ballad in Early Nineteenth-Century Russian Literature (1976) and Dreams and the Unconscious in Nineteenth-Century Russian Literature (1984). A prolific translator, he has made a number of works available for English language readers, including prose by Tolstoy, Turgenev, Chernyshevsky, Herzen, Tur, Druzhinin, Artsybashev, Sleptsov, Jabotinsky, and others. His translations of Dostoevsky’s works include Notes from Underground (1989, 2nd ed. 2001), Devils (2010), and Crime and Punishment (2018).

Nicolas Pasternak Slater has a half-Russian background, was brought up bilingual, and studied Russian at school and university as well as during his military service. He spent most of his working life as a hospital doctor and came to translation after retirement. Besides Crime and Punishment (2017), his translations include Pasternak’s Family Correspondence (2010), Lermontov’s A Hero of our Time (2013), Pushkin’s The Journey to Arzrum (2013), Tolstoy’s The Death of Ivan Ilyich and Other Stories (2015), and, most recently, Chekhov’s The Beauties: Essential Stories (2018).

The cover image for this post is a screenshot from Piotr Dumała’s animated adaptation of Dostoevsky’s novel (Zbrodnia i kara, 2000). You can view the full animation here.