“The Dream of the Ridiculous Man” comprises something like a Dostoevskian genealogy of morals.  When the story’s narrator, who has been driven to the brink of suicide and, as it would seem, utter indifference towards his fellow human beings, realizes that he still cannot extinguish an irrepressible spark of moral compassion for a suffering little girl, he sees a dream that fantastically unfolds the source this moral feeling.  In the process Dostoevsky takes us on a journey through time and space, to a distant planet where a beautiful people live in harmony and bliss—until we witness their shocking descent into the deceit, violence and suffering with which we are so familiar.  Yet in the end the narrator finally understands! 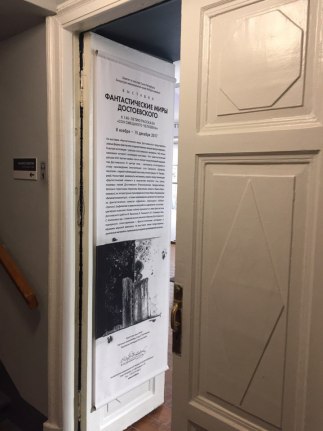 The ongoing exhibit at the Dostoevsky Museum in St. Petersburg, dedicated to the 140th anniversary of “Dream of the Ridiculous Man”—“Фантастические миры Достоевского” [The Fantastic Worlds of Dostoevsky]—presents a wide array of materials that aim to contextualize Dostoevsky’s artistic vision and illuminate its genesis.

Considerable attention is devoted to tracing the diverse forms of “the fantastical” throughout Dostoevsky’s writings: from the schizophrenia of The Double to the frivolity of “The Crocodile”; from Raskolnikov’s dream in Siberian exile to the satirical vision of the afterlife in “Bobok.”

The exhibit is, moreover, divided into visions of “paradise” and of “hell,” reflecting the duality depicted in “The Dream of the Ridiculous Man.”  The story is thus shown to resonate with a multitude of other works: literary, religious, and visual, including Dante’s Inferno, the bathhouse scene in Notes from the House of the Dead, and Hieronymous Bosch’s remarkable 16th-century triptych “The Garden of Earthly Delights.”

There are various historical artifacts from Dostoevsky’s own time, including manuscripts and a scientific brochure on trichina, which Dostoevsky researched before composing Raskolnikov’s Siberian dream. 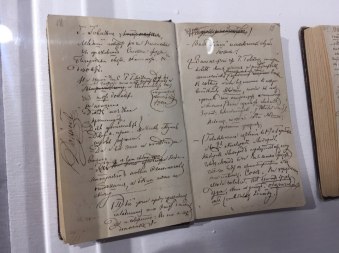 To top it all off, you can watch the 1992 animated adaptation of “The Dream of the Ridiculous Man.”

The exhibit runs through December 29. You can read a public domain English translation of “The Dream of a Ridiculous Man” here.

Vadim Shkolnikov is a dotsent in the Department of Comparative Literature and Linguistics at the Higher School of Economics in St Petersburg.  He is currently writing on Dostoevsky’s Notes from Underground and its (unintended) connection to Russian revolutionary terrorism.  And having now lived in St. Petersburg for a year, he feels that he has learned all there is to know apropos of wet snow!