‘Dostoevsky’ and ‘revolution’ seem to be an unlikely pair of bedfellows. As a writer who actively sought to refute the revolutionary ideologies of his time, while maintaining staunch support for Russian monarchy, Dostoevsky may be better understood as an ‘anti-revolutionary’ writer. But is this all there is to be said on the matter?

UCL’s conference on ‘Revolutionary Dostoevsky: Rethinking Radicalism’ aimed at understanding the ways in which Dostoevsky can be connected with ‘revolution’. Carol Apollonio’s provocatively titled keynote address, ‘Dostoevsky the Bolshevik’ cleared space for just such an unlikely association.

Acknowledging the fact that Dostoevsky quite deliberately wrote against the revolutionary writers of his time including Chernyshevsky and Pisarev, Professor Apollonio unpicked some of the undercurrents of revolution pulsing through the author’s oeuvre: his revolutionary poetics, producing gripping narratives dominated by the anti-heroic perspectives of Dostoevsky’s famous rebels that still seem modern to us some 150 years after publication; his nascent and ill-fated participation in the Petrashevsky circle, the mock-execution and sentence of exile handed down to him for a political transgression; the universal respect accorded to Dostoevsky at his funeral, when revolutionaries and conservatives gathered together in a bipartisan show of admiration. All these indicate that Dostoevsky and revolution are much more intricately interwoven than might first appear. It is certainly the case that Dostoevsky’s novels penetrate deeper into the revolutionary psyche than other ‘anti-nihilist’ writers of his time.

However, if objections still persist, perhaps we can nuance our definition of ‘revolution’. ‘Revolutionary thinking’ need not always indicate the desire for forced societal change in the name of Western European proletarian ideals. Instead, it may indicate, more broadly, the possibility of radical societal and/or personal transformation. Towards the end of her address, Professor Apollonio alluded, somewhat tongue-in-cheek, to modern fascinations with cryonics and the possibility of ‘resurrection’. She made associations with the peculiar 19th-century theorizing of Nikolai Fedorov, to imply that revolution in Dostoevsky, whose belief in the possibility of apocalyptic resurrection is well known, need not refer only to politico-ideological mutation, but also to wholesale existential transformation.

In his paper, ‘A Willful Lazarus’, Alexis Klimoff explored how ‘resurrection’ in Dostoevsky refers to the possibility of individual spiritual revolution, or ‘resurrection’ implicit in the rebellious and ‘willful’ discourses of the underground man and other characters in the novels. In the same panel, George Pattison, delineated the metaphysical and ethical principles implicit in the path towards spiritual revolution signposted in Dostoevsky’s novels. His paper, titled ‘We are all guilty – but for what?’ discussed exactly what it purported to, drawing insightful contrasts between seminal and volitional guilt, and emphasizing the author’s belief in freely undertaken individual moral responsibility ‘for all’, in order to illuminate the theosophical intricacies built into Dostoevsky’s fundamental leitmotif of universal guilt. The reference to Levinas is certainly an apt one, for the philosopher quite openly appropriates Dostoevsky’s conception of universal guilt – of ‘Each being guilty for all’ (‘and ‘I’ more than Others’, Levinas might add, as Dostoevsky nods agreeably from the grave) repeatedly in his philosophy. The robust connection between Dostoevsky and Levinas has not yet been adequately explained and Professor Pattison’s talk shed light on some of the significant moral congruencies that exist between the two thinkers.

Apart from the various explorations of ‘spiritual revolution’ in Dostoevsky’s fiction, there was also a broad focus throughout the conference on the inter-relations between characters and the striking radicality and prescience implicit in the structure of these dialogic relations: Artemy Magun recognized the constant experimentation, probing and provocation underlying Dostoevsky’s fictional world; Lynn Patyk presented the theme of ‘provocation’ and how it relates to unmasking and double-voiced discourse; Malcolm Jones recognized the Derridian undertones to the underground man’s narrative all directly or indirectly raised questions about the nature and telos of the dialogism which structures relations between characters in Dostoevsky’s novels.

Contextualizing ‘dialogism’ briefly though Bakhtin may help underscore the innovation and creativity of this line of inquiry into Dostoevsky’s fiction. According to Bakhtin, Dostoevsky’s dialogism, his myriad double-voiced discourses, and the infinite fragmentation of public consciousness they imply serve an integral dialectical purpose in his fiction. Characters seek, through interpenetrative dialogue with one another, to pursue the truths of their own consciousness, and achieve a sense of polyphonic harmony, subsistence in difference, a sobornost’, a holy ‘communion of unmerged souls’.

Denis Zhernokleyev’s paper on the influence of the demonic feuilleton on Dostoevsky’s novels puts into question this ‘optimistic’ understanding of the dialogism inherent in the fiction. Looking particularly at the idea of false confession in Notes from the Underground and malicious relationships in The Devils, Denis was able to demonstrate the complex psychology underpinning these dialogic interactions between Dostoevsky’s diverse set of ideologues. He identified the narrative significance of epistemic violence as the root malevolent desire of Dostoevsky’s more ‘demonic’ interlocutors when they engage in lively metaphysical, social and moral debates. Essentially, this argument puts into question the ‘constructive’ nature of these dialogic interactions, suggesting implicitly that their core function is fragmentation without individual redemption.

This thread of discussion on the nature of dialogic relations was particularly interesting for two central reasons. First, it emphasized how scholarship now appears to be more interested in the ontological nature of the relations between characters, than with the specific ‘content’ of the characters’ own theosophical positions. Secondly, it may be argued that this thread draws on long-standing philosophical questions about the nature of the relation between identity and difference. If the epistemic violence implicit in dialogic relations implies the impossibility of characters maintaining a unified perspective, without offering forth a constructive path towards personal redemption, or towards a primordial experience of their own individuated truth or ‘idea-force’, then there is no identity in Dostoevsky’s works, only diffusion, fragmentation, non-identity and difference in the relation or connection between compromised self-identities. In other words, the probing, experimenting, provoking, epistemic violence in a character’s relationships with others does not produce a heightening or furthering of that character’s pursuit of their own deepest self, of their authentic self-identity. Instead, malice becomes its own reward. Dostoevsky’s vast exploration of human nature ultimately reflects only the ubiquity of human desire for malicious pleasure.

In response to this, perhaps it could be demonstrated that characters do manage to subsist on the threshold of experience, even if only for a few precious ‘eternal’ moments, to achieve a sense of self-identity by experiencing the possibility of the transcendent validity of their own deepest ‘idea-forces’.  If this were true, then the dialogic relations between characters, even though often wrought in a desire for epistemic violence, may indeed have a ‘constructive’ aspect to them, as they serve to raise characters towards the momentary fulfillment of their deepest metaphysical and moral ideas.

The talk by Denis was clearly brilliant, and offered much food for thought. There were also noteworthy papers by Chloë Papadopoulos, Muireann Maguire, Vadim Shkolnikov, Lindsay Ceballos, Yuliya Shcherbina, Connor Doak and many others on a variety of topics related to revolution and radical thinking in Dostoevsky. I apologize for not being able to give them the due attention they deserve in this brief blog post. 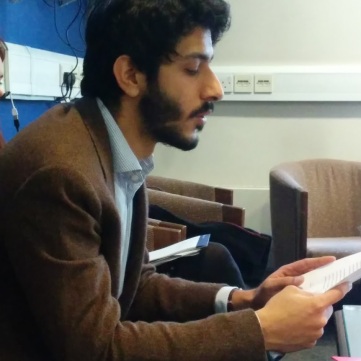 The author reads his paper 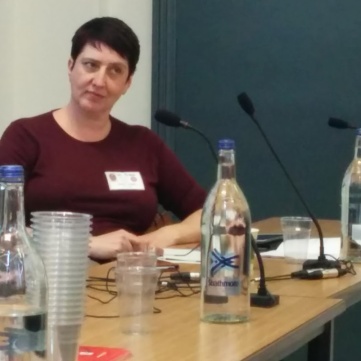 The above images are of the author (L) and the conference organizer, Sarah Young (R). Both were taken by Muireann Maguire. Many thanks to Dr Maguire for granting permission to use her photos, both these and the above, for this blog post!

Bilal Siddiqi is a PhD student in the School of Slavonic and East European Studies at University College London. He is currently writing on the role of ‘epiphany’ in Dostoevsky’s Post-Siberian fiction, as well as exploring congruencies between Dostoevsky’s fiction and existential phenomenology. He delivered a paper at the conference titled, ‘Death and Immortality: Spiritual Revolution in Dostoevsky’s Demons’