Readers of The Bloggers Karamazov do not need to be convinced that time spent alone with Dostoevsky is time well spent. But we live in an age when reading itself, and engagement in the humanities generally, is under attack from all sides. Demonic forces, toxins and temptations abound, even (or especially) within institutions of higher education: careerism, pre-professionalism and utility; transient titillations and instant gratification; ephemeral and flashy things; insidious technological tools; and social media outlets like, ahem, this blog. In the face of all this chaos, the quiet, dark, brilliant, reader can use a little company. 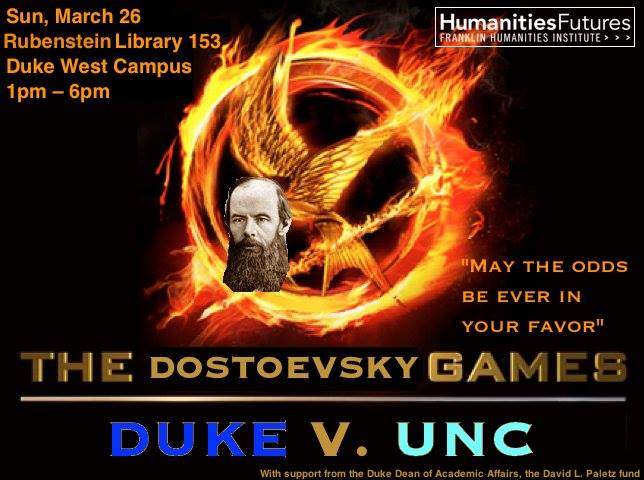 Duke University and the University of North Carolina at Chapel Hill have long engaged in the fiercest rivalry in college sports. This year’s March Madness expanded the field of competition beyond the basketball court into Duke’s Rubenstein Library, where on 26 March 2017 elite teams from both institutions clashed in The Dostoevsky Games. Students clad in UNC light blue and Duke royal blue, coached by UNC’s Radislav Lapushin and Duke’s Carol Apollonio, respectively, met in a series of epic battles around Jeopardy, Taboo, “Name the Quote,” Dostoevsky Debate, and the performing arts.

The program is now available exclusively on The Bloggers Karamazov, and you can view it here! 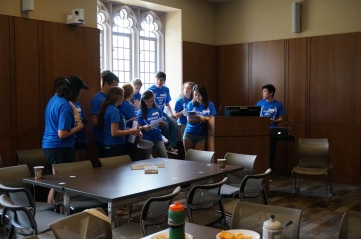 The Games were well attended, with scores of competitors and spectators. Passions ran high, and the teams ran neck and neck through the afternoon, trading lead changes and ties. UNC presented a short film and a series of skits and mock interviews with Dostoevsky characters that, despite the high seriousness of the subject matter, sparked hilarity in the hall. For its part, Duke moved heartstrings and brought tears to many eyes with a soulful musical performance. The extremes of emotion thus inspired were worthy of the Master. One look at the UNC team’s winning video “The Fresh Prince of ‘To Dare'” will convince the readers of The Bloggers Karamazov of the overall quality of The Games. 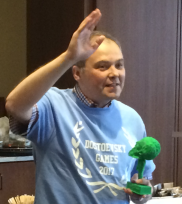 Ultimately, in a close race that seemed to come down to an edge in the performing arts, the workings of fate, and possibly a sheer numerical advantage, UNC edged past the hosting team and took possession of a well-deserved freshly 3D-printed Dostoevsky Games 2017 trophy. (Radislav Lapushin waves with the trophy in the image to the right)

The Dostoevsky Games benefitted from the intellect, stamina and energy of a world-class team of scholars, ranging from newly minted to well seasoned. Doctors Michael Marsh-Soloway (Master of Bobble-Heads and Busts), Denis Mickiewicz, and Ambassador Jack Matlock lent dignity and excitement to the occasion; Professors Irene Masing-Delic and Ilya Kliger served valiantly and with ruthless fairness as celebrity judges; and Professor Eric Naiman delivered an impressive keynote address. 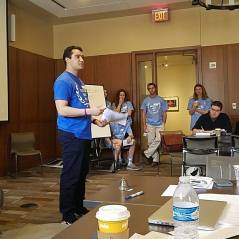 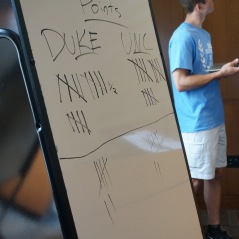 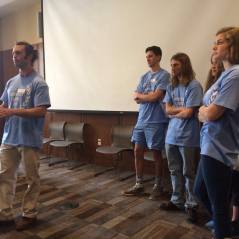 The teams were so carried away by the intellectual ferment in the room that they remained on the field of battle through the Games’ culminating event: small-group discussions of Crime and Punishment over dinner led by the celebrity guests and judges. True to the spirit of Dostoevsky, groups at two of the tables carried on their frenzied debates even as tables and chairs were cleared from the room, throats were cleared, and doors were slammed more loudly than would normally be warranted. It is to the UNC team’s credit that its members remained on the scene with only the faintest of defections (though with some furtive gleams of cell-phone screens), even after 5:00 p.m. when their men’s basketball team began play in the Elite Eight. Skill, luck, dedication, passion, fate…this year they paid off for both UNC teams. But even a national basketball championship is a transient thing when you take home a Dostoevsky Bobble Head, a 3D printed trophy, and the World Championship in the first, and possibly only ever, Dostoevsky Games. 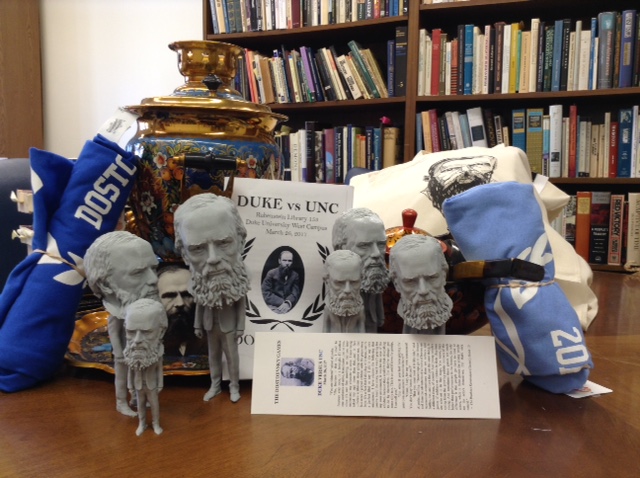 Players and coaches on both sides are still in recovery. But should additional teams desire to take up the tradition or issue a challenge, we are available for consulting, and may even rise to compete again. 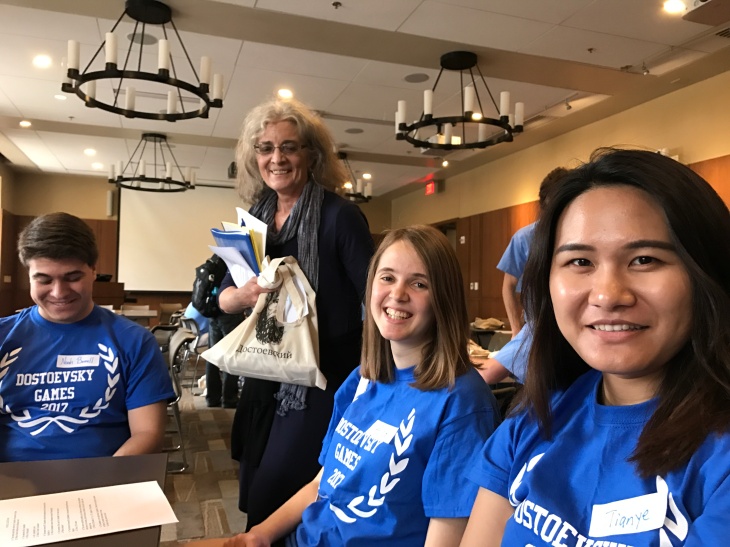 The Dostoevsky Games were fueled by Duke University’s Humanities Futures program (The Franklin Humanities Institute) and the David L. Paletz Course Enhancements fund, with contributions from the Duke Department of Slavic and Eurasian Studies.

Carol Apollonio is the President of the North American Dostoevsky Society and a Professor of the Practice of Slavic and Eurasian Studies at Duke University. Her publications include Dostoevsky’s Secrets: Reading Against the Grain (2009) and The New Russian Dostoevsky: Readings for the Twenty-First Century (2010).