The original Russian version of this article was first published in Thomas: an Orthodox Journal for Doubters (foma.ru), in Оctober 2016. It is re-published here in the form of Mr. Herman’s English translation with the permission of the author and of the editors of Thomas.

Anna Grigorievna Snitkina entered into the house of her future husband, the 44-year-old already famous author Fyodor Mikhailovich Dostoevsky, in many ways a naive young girl. Fyodor already bore on his shoulders many burdens of life – penal servitude and hard labor, exile, an unhappy first marriage, the death of his spouse and of his beloved brother, unending debts, the terrible physical pain of epileptic seizures, obsessive roulette gambling, loneliness and most importantly – a knowledge of life from its most unattractive side. Anna was optimistic, raised in a warm household without stress, in fact she was not able to manage a household under stress. The depth and strength of her character, which she did not notice in herself because of her own unpretentiousness, Dostoevsky was able to notice.

Their hurried marriage could easily have ended in rapid disappointment. But their marriage brought to the renowned author precisely the great happiness, which he had never known before. In those last 14 years of his life he wrote the most powerful and well known of his works. “You are the only woman who understood me,” he repeated to his Anya, and it was precisely to her that he dedicated his magnificent and final novel, The Brothers Karamazov.

What kind of marriage was it? How was a fragile, inexperienced young lady to make a genius happy–a man who knew all the evil of life and yet had become the great preacher of the Light? 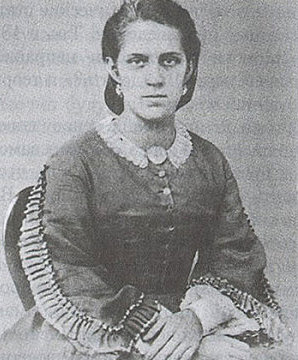 Anna Grigorievna in the 1860s

At the beginning of the 20th century, the Russian actor L. M. Leonidov recalled his encounter with the widow of Dostoevsky, Anna Grigorievna.   Leonidov who played Dmitri Karamazov in the 1910 production of The Brothers Karamazov at the Moscow Art Theatre, wrote, “I saw and heard ‘something’ not like anything I had known, but through this ‘something’, through this 10-minute meeting, through his widow I sensed Dostoevsky; 100 books about Dostoevsky would not have given me as much as that encounter.”

Fyodor Mikhailovich recognized that he and his wife were united in the spirit. But at the same time he also recognized the disparity in their ages: between the spouses there was almost a quarter of a century of difference. This inequality in their life experiences could have led to two vastly different possibilities: either they suffered together several years, and then separated; or they lived together happily for the remainder of their lives. And judging by the fact that Fyodor Mikhailovich wrote with astonishment and delight on the 12th anniversary of his wedding that he was unceasingly and hopelessly in love with his Anya, obviously their life really was very happy.

Nevertheless their life was not easy from the beginning: the marriage of Anna Grigorievna and Fyodor Mikhailovich endured many problems and struggles – poverty, sickness, the death of children, and the fact that against their marriage rose up the entire Dostoevsky clan. But it helped them to resist that they – the spouses – looked at life in the same way, having been brought up in the same values.

Anna Grigorievna was born 30 August 1846 in the family of a minor functionary, Grigory Ivanovich Snitkin. Along with his elderly mother and four brothers, one of whom was also married and had children, Grigory Ivanovich and his family lived in a large apartment of 11 rooms. Anna Grigorievna recalled that in their large family unit a friendly atmosphere reigned. She knew no arguments to clarify family relationships and she thought that this was the case with any family.

The mother of Anna Grigorievna, Anna Nikolaevna Snitkina (Miltopeus), was of Swedish and Finnish descent, and was a Lutheran. Her love for her future husband presented her with a serious choice: marriage with this beloved man or faithfulness to the Lutheran faith. She prayed a great deal for a solution to this dilemma. And once she had a dream: in her dream she entered an Orthodox church and knelt down before the Shroud of Christ and prayed. Anna Nikolaevna took this as a sign; she decided to convert to Orthodoxy. To her astonishment, when she arrived at the church of Saints Simeon and Anna on Mokhovaya Street in St. Petersburg for her confirmation, she saw that very same Shroud in the exact position it had appeared in her dream.

From that time onward, Anna Nikolaevna Snitkina lived a life faithful to the Orthodox church, going often to confession and communion. The spiritual director she chose for her daughter Anya, whom she called by the diminutive Netochka, was from a young age the Archpriest Filipp Speransky. At the age of 13, while vacationing in Pskov, the young Anya decided to enter a monastery (convent). Her parents were able to have her return to St. Petersburg, although they resorted to the cunning ruse that her father was seriously ill.

In the Dostoevsky family, as he expressed it later in A Writer’s Diary, “The Gospel was known essentially from the earliest childhood.” His father, Mikhail Andreevich, was a physician of the Mariinsky Hospital for the Poor on Bozhedomka Street in Moscow. The fate of those whom the author would later make the heroes of his novels spread themselves before his eyes and here he learned compassion from an early age. This compassion was nevertheless similar in character to that of his father – strangely mixed with magnanimity, moroseness and irascibility. Dostoevsky’s mother, Maria Fyodorovna, whom he loved and respected immensely, was a person of uncommon goodness and sensitivity. She died like a saint: just before her death she regained her “complete consciousness, requested an icon of Our Savior, began blessing her family, giving barely audible blessings and admonitions.”

In Anya Snitkina Dostoevsky saw a similar good, sensitive and compassionate heart. Soon he felt that, “with me she might be able to be happy.” Or more precisely he meant, she might be happy, but not me. Did he really think about his own happiness? Like anyone he did think of it. He spoke with friends and hoped that after all the difficulties of his life and at his age, which for the generation of his parents was already old age, he would come to a quiet harbor and would be happy in his family. “Happiness has not yet occurred. I am waiting for it,” he said, already a man tired of life.

As often happens, before the moment of obtaining such happiness, fate brought to each of them tragic critical events. In the spring of 1866, after a year of continuous suffering, Anna’s father died. A year earlier the physicians had announced that Grigory Ivanovich was incurably ill and that there was no hope for any improvement. Anna was therefore obliged to leave the St. Petersburg Pedagogical Gymnasium where she was a student to spend more time with her father.

At the beginning of 1866 in St. Petersburg there opened stenographic courses, which would allow her simultaneously to continue her education and to help nurse her father – so Anna Grigorievna, at her father’s insistence, signed up for the courses. But after 5-6 lectures, she returned home in despair that “tarbar literacy [stenographic system]” had turned out to be a too difficult an undertaking. Grigory Ivanovich however was a little upset at the lack of patience and perseverance from his daughter and made her promise that she would finish the courses. If only he could have known how fatefully important was this promise.

What was happening at that time in the life of Dostoevsky? He was then already quite well known – all his works were even being read in the Snitkin household. His first novel, Poor Folk, written in 1845, had elicited the most complimentary praise from the critics. But then there was a swell of negative comments pelted down on his subsequent works, there was a sentence of hard labor in a penal camp, the death from tuberculosis of his first wife, and the sudden death of his beloved brother, Mikhail. In addition there were all the financial obligations and debts – alleged and real – of his brother, which Fyodor Mikhailovich took upon himself as the responsible party. At the time of his first meeting with Anna he was financially responsible for his grown 21-year-old stepson (the son of his first wife Maria Dmitrievna), for the family of his deceased brother Mikhail, and for assistance to his younger brother Nicholas. As he later recognized, “all my life I was squeezed financially.”

At the end of the summer of 1866 this genius of literature was led by these needs to sign an unfair, one-sided contract with his cunning and enterprising publisher, Fyodor Timofeevich Stellovsky. That fellow paid Dostoevsky 3000 rubles for which Stellovsky agreed to publish a complete collection of the works of Fyodor Mikhailovich, under the condition that Dostoevsky, by November 1, 1866, would write a large novel of real value. If there was a delay of even a month, Dostoevsky was to pay a large forfeiture, and if he could not produce a novel by December 1, the rights to all his works for 9 years were transferred to Stellovsky. Dostoevsky would be deprived of even a percentage from their publication. In effect this would doom the author to debtor’s prison and abject poverty. As Anna Grigorievna would later write in her “Memoirs”, Stellovsky “knew how to lie in wait for people in difficult moments and to trap them in his nets.”

Even the thought of writing a new full-value novel in such a short period brought Fyodor Mikhailovich to depression – he had not yet even finished work on Crime and Punishment, the first parts of which had come out in print, and that work needed to be finished. But by not fulfilling the conditions of Stellovsky, he risked losing everything. That prospect seemed more real than the possibility of laying on the desk of the editor a completed novel in the remaining time.

As Dostoevsky later admitted, in this difficulty, Anna Grigorievna was the first person to offer him any real help – and not just words. His relatives and friends sighed, groaned, lamented, sympathized, gave advice, but no one entered into this essentially hopeless situation. Except for this young lady, recently having completed the stenography course, but actually without any work experience, who appeared at the doors of his apartment. She had been recommended by Pavel Matveevich Olkhin, the founder of the stenography course, as the best of his graduates.

“It is a good thing that you are not a man,” said Dostoevsky after their first short meeting and writing trial.

“Because a man without fail would take to drink. You probably have not started drinking…?”

Valeriya Posashko Mikhailova was born in 1985 in Minsk.  She studied journalism at the National Research University Higher School of Economics in Moscow.  A writer and journalist, she also is an accomplished triathlete and parishioner of the Orthodox church of the All Merciful Savior in central Moscow.  In addition to Dostoevsky her favorite authors are Gilbert Chesterton and Henryk Sienkiewicz.

Thomas E. Herman is a retired pediatric radiologist from St. Louis Children’s Hospital.  He is a member of the friends of Ukrainian radiology, and has lectured in Russian and Ukrainian on radiological topics, primarily in Ukraine.