By now, you have no doubt heard about the @RodionTweets project (still ongoing!), whereby an ambitious team of Dostoevsky scholars brought Crime and Punishment into the twenty-first century, tweeting the events of the novel from Raskolnikov’s point of view to celebrate the 150th anniversary of the novel. As Professor Carol Apollonio put it during her keynote address at the Crime and Punishment at 150 conference this past fall, criticism is “nothing but long, smart tweets.” She went on to say that, “in this hasty, impatient age, there is a whole lot to be said for short, smart tweets.” Her absorbing address, handily performed and very witty throughout, began with one of the primary concerns of the Twitter project and of the conference at large: how to update the text (indeed, any text) for the contemporary reader—or “non-reader”—, whose attention has become the site of a continuous battle between various media. Academics must not point fingers, Apollonio warned us, but must rather step up to the plate and do the greatest kindness, that is, initiate a conversation.

Bakhtin tells us that “to be means to communicate dialogically,” that “two voices is the minimum for life, the minimum for existence.” (Problems of Dostoevsky’s Poetics 1984 p. 252). Thus, the importance of any novel, not least of all of Crime and Punishment, lies in our discussion of it, irrespective of the medium. Literature comes to life in dialogue—not only in dialogue between author and reader, but between the readers themselves, thereby enriching our understanding of both self and other. It is in dialogue that the human subject is born, for the subject does not stand alone: we live in the world—and through the word—of the other. In Bakhtin’s words, “only in communion, in the interaction of one person with another can the ‘man in man’ be revealed, for others as well as for oneself” (Ibid.).

With this in mind, throughout her talk Apollonio encouraged her audience to participate, right then and there, in an ongoing, live Twitter discussion under the hashtag #CP150, transforming each audience member from a passive listener into an active participant (granted, of course, that they are active on Twitter).

What gets Raskolnikov into trouble, according to Apollonio, is exactly his lack of communion, i.e. communication. He reads, and reads, and reads, but he keeps his thoughts bottled up, denying himself the dialogue so necessary to life. As such, Raskolnikov remains to a degree unformed, incomplete—in cutting himself off from the world, he cuts himself off from his self. Despite the fact that the bulk of Crime and Punishment is composed of his thoughts, they are rarely in reality voiced. Apollonio noted that, even in the novel’s most famous dialogues, Raskolnikov is mostly silent, be it with Marmeladov, Porfiry Petrovich, or Svidrigailov.

To prove her point, Apollonio did the kind of thing which, admittedly, “non-academics mock academics for doing”—that is, she took advantage of the ‘find’ function on a Word-document version of the entire novel, searching for each and every quotation mark in the text to find where, exactly, Raskolnikov is speaking, and on the other hand, where he is thinking. Unlike in English translation, where dialogue and thought are both marked by quotation marks and differentiated by quotation words (“he said” vs. “he thought”), in the Russian original, dialogue is marked by long dashes at the beginning of utterances, and thoughts by quotation marks. Here, however, she came up against some trouble, noting that serious slippages occur throughout the novel. In fact, Raskolnikov appears to think his thoughts aloud time and again, directed toward no one in particular. 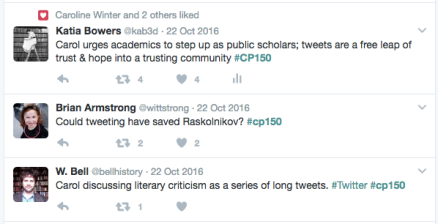 For Apollonio, this presents one of the central problems of the novel: what is dialogue without an other? “Does it matter if he speaks aloud if no one seems to hear him,” she asked her audience, deeming this this the classic ‘tree falling in the forest’ dilemma, presented anew throughout Crime and Punishment. Dostoevsky blurs the boundaries between the speaking and the thinking subject in much the same way as he blurs the boundaries between his protagonist’s inner life and the outside world. According to Apollonio, Dostoevsky thereby brings us back to the problem of “the isolated individual’s uncertain ontological grounding,” again reminding me of Bakhtin’s emphasis on dialogue. In isolation, the subject does not exist in full capacity—if at all. And this could not be truer of the protagonist of Crime and Punishment. Ultimately, the reader witnesses Raskolnikov move from “mute isolation” to “speaking his guilt” and finding new life in the world of the other.

Toward the beginning of her talk, Apollonio suggested the following, which touched me greatly. “Tweeting does not assume anyone is listening,” she said, “but it does convey our yearning for conversation, for someone to listen and respond. It is a free leap, full of trust and hope, into an invisible community.” I now see that this leap of faith is related directly to Raskolnikov himself—it is the leap which he denied himself throughout the novel, too frightened to act on this basic human need, and which he finally learns to take, born again, in its last pages.

2021 update: The recording of Carol Apollonio’s keynote is available here.