Over the years, there have been many responses to Dostoevsky’s Crime and Punishment. For example, Nabokov wrote dismissive words about the novel and intentionally distorted its title when he referred to it as Crime and Slime. Russian sculptor and artist Ernst Neizvestny’s non-realist illustrations of Dostoevsky’s novel were published in a 1970 Soviet edition of the work. Maurice Sagoff, in his bestselling book, Shrinklits. Seventy of the World’s Towering Classics Cut Down to Size, summarizes Crime and Punishment in the following way:

Cinematic renderings of and responses to Dostoevsky’s novel have been created in different countries – to name but a few, Russia (no surprise!), France, the United States, and Australia. There is the Russian Lev Kulidzhanov’s classic film, Prestuplenie i nakazanie. There is French director Robert Bresson’s Pickpocket. Woody Allen wrote and directed three films connected to Crime and Punishment: Crimes and Misdemeanors, Match Point, and Irrational Man. And now, there is, from Australia, Andrew O’Keefe’s 2016 Crime and Punishment, a “translation” of the novel into the modern age. It is on the latter, filmed in Melbourne, that I shall focus my comments. 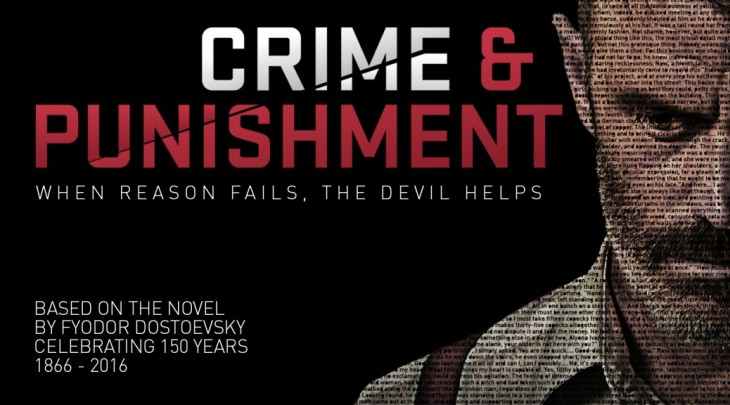 The crime, stripped bare of its nineteenth-century Russian context, is motivated, in part, by the exorbitant cost of a university education and resulting financial burden on the student Raskolnikov. O’Keefe’s Crime and Punishment was distributed by Apocalypse Films, a company that he started with several fellow graduates of the University of Melbourne’s Victorian College of Art. During 2012, as O’Keefe was working on Crime and Punishment, he was asked, “Who are you?” by The Melbourne Local. He replied, “A dad. A Melburnian. A filmmaker. A writer. A lecturer. A Pisces. A dreamer. In that order.” In his adaptation of Dostoevsky’s novel, O’Keefe’s second feature film, we are certainly made aware of his talents as a filmmaker and a writer.

O’Keefe’s Crime and Punishment is a low-budget endeavor that does not seem, on screen, to be low budget. For instance, the fact that there is a claustrophobic feel to Raskolnikov’s spartan room reflects the novel and Raskolnikov’s own closed-in inner psychological space. The musical score, by Amy Bastow, matches the psychological mood of the film. The music mimics Raskolnikov’s frenzied state of mind. The sound effect of Raskolnikov’s quick and heavy breathing contributes to the depiction of his heightened anxiety. This is a good touch, but for me, this sound effect is a bit overused.

For those who have read Dostoevsky’s novel, a question might arise: what is O’Keefe’s rationale for changing some of the names of characters in the book, but identifying other characters by the names that Dostoevsky had chosen for them? Thus, Raskolnikov, Porfiry, and Sonya’s names remain unchanged. Certain names are slightly altered. Marmeladov becomes Marmelade, Lizaveta Ivanovna is Elizabeth, and Polina is Polly. Others bear no resemblance to the originals — for instance, Quincy as Luzhin, and Helen as Dunya. Could the reason be that the combination of Dostoevsky’s names and the decidedly unRussian names reflects the essence of the film itself, which contains both a combination of faithfulness to certain aspects of the novel, and the addition of elements that place the events in a contemporary foreign milieu?

O’Keefe has stated that the idea for the film came to him because he was fascinated by the interplay, in the book, between Raskolnikov and Porfiry. He said that he immediately thought of the two actors, friends of his, who would play those two roles. Lee Mason, as Raskolnikov, and Christopher Bunworth, as Porfiry, are indeed well cast. They give performances that are true to the personalities of Dostoevsky’s characters. Mason displays the requisite frenzy, anxiety, and obsessive qualities. Bunworth exhibits the same kind of cunning with which Dostoevsky’s Porfiry ensnares Raskolnikov.

In terms of visual aspects of the film, O’Keefe makes interesting artistic decisions by conveying Dostoevsky’s thematic concerns. Sonya’s religiosity is alluded to by the cross that she wears around her neck and by the camera’s focus, more than once, on her fingers as they touch the cross. A poster of Napoleon, with the words, “Destiny. Power. Passion,” is affixed to the door in Raskolnikov’s room. Raskolnikov explains his extraordinary man theory in a paper that he presents at a university conference. Porfiry, in the audience, asks him to distinguish the extraordinary man from the ordinary man. Raskolnikov later tells Sonya that he killed because he wanted to be like Napoleon. Another imaginative decision, on O’Keefe’s part, is the way in which he films a conversation that Raskolnikov and Sonya have as they are seated outside, on a bench. They are filmed against the background of greenery and flowers. In the novel, before the murder, Raskolnikov is among greenery, as he decides not to commit the murder, but then later changes his mind. In the film, at the end of the Raskolnikov-Sonya bench scene (well after he has killed two people), Sonya places her head on his shoulder. He abruptly gets up. Thus, O’Keefe is showing Raskolnikov’s ambivalence, at that moment, toward choosing good over evil.

The Australian director successfully “translates” certain scenes of the novel into episodes that rely on the capabilities of modern machines, a car, in one instance, and mechanical surveillance techniques, in another. Dostoevsky’s Raskolnikov contemplates suicide by gazing into a Petersburg canal. O’Keefe’s Raskolnikov pipes carbon monoxide into a car, but then decides to escape from the car. As in the novel, the Svidrigailov character overhears Raskolnikov’s confession to Sonya, but not, as in the novel, by listening through the wall that separates his room from Sonya’s. Instead, the conversation is taped.

In O’Keefe’s film Raskolnikov does not ask Sonya to read him the raising of the Lazarus passage in the Bible. There is no post-confession equivalent of Raskolnikov’s gradual path, in Siberia, to redemption. Yet O’Keefe does include, in his adaptation of the novel, the promise of a new life for his protagonist. The audience sees Raskolnikov outlined against the background of Melbourne fireworks celebrating the new year.

Andrew O’Keefe’s film is definitely one of those “new tales.”

Ellen Chances, a professor of Russian literature at Princeton University, is the author of Conformity’s Children. An Approach to the Superfluous Man in Russian Literature;  and Andrei Bitov. The Ecology of Inspiration (Cambridge University Press), the first book in the world on Bitov’s works. Her specialties include the 19th, 20th, and 21st-century Russian novel; contemporary Russian literature and culture; the study of literature in its historical context; journalism; the interplay between literature and other arts; literature and cinema; the ethical dimensions of cinema; Dostoevsky; Chekhov; Kharms; and Bitov. She is currently working on a second book about Bitov’s writings.