University of Toronto professor Kate Holland asked her SLA314 Dostoevsky undergraduate students to visit the Robarts Library exhibit Crime and Punishment at 150: Global Contexts and write up their reflections on one exhibit item. Their writing, collected here, reflects not only the global spread of Dostoevsky’s influence, but also the diversity of media used to engage with his 1866 novel. To learn more about the exhibit, read curator and Toronto PhD student Barnabas Kirk’s blog post from last month. To read the first group of students’ posts, see A Virtual Visit to the Robarts Library, part 1.

After checking out the 150th anniversary exhibit of Crime and Punishment at Robarts library, I was interested to see the film Pickpocket by Robert Bresson among the artifacts. I had seen two of the esteemed French director’s works: Au Hasard Balthazar and A Man Escaped, and thought his style would make for a unique take on Dostoevsky’s work. Stylistically, the two auteurs are quite different. Bresson’s works have a cold, muted feel, where characters interact dispassionately towards one another and emotions are buried deep behind blank expressions. On the other hand, Dostoevsky’s characters spark with life, and given Raskolnikov’s feverish internality, it seemed like a tough character to represent on screen.

That being said, the thematic undercurrent of Bresson’s and Dostoevsky’s works are highly spiritual, this reveals the common area Bresson sought to explore in Pickpocket. Raskolnikov’s counterpart in Pickpocket, Michel, is less obviously haunted by his crimes; in this case he is a serial pickpocket. However, he, his friends and family respect the moral corruption of the crime, but, like the murder, it was a crime somewhat brought about by poverty. Pickpocket is a lean 70 minute version of Dostoevsky’s novel and it cherry picks the ideas it wants. It leaves out a large part of the extra characters, keeping only Raskolnikov, Razumikhin, Sonya, and Porfiry, it also keeps Raskolnikov’s Napoleonic vision of crime as well as his final redemption in prison through Jeanne, Pickpocket’s Sonya surrogate.

Dostoevsky and Bresson’s fixation on spirituality meant that both artists wanted to include the controversial redemption epilogue in their works. Bresson’s may work better because the film has Michel fail once at becoming honest and finding redemption, but he falters and finds redemption in prisonthrough Jeanne’s forgiveness. He had earlier told her that he could quit stealing and her forgiveness of his faults redeems Michel, just as Sonya’s love redeemed Raskolnikov. 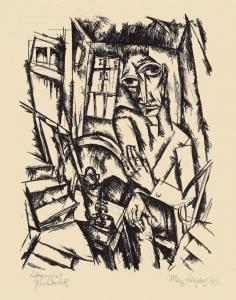 When browsing the Crime and Punishment at 150: Global Contexts exhibit, Max Burchartz 1887-1961: Kunstler, Typograf, Padagoge (Berlini Jovis, 2010) stood out to me almost right away. The imagery portrays a distorted Raskolnikov along with some of the people in his life. I found this imagery to be an almost perfect symbol of how I imagined Raskolnikov’s mind to be while reading Crime and Punishment: a very active one caught up in its own distorted version of reality. Amid the intended chaos, the imagery draws attention to the characters’ faces, something I found particularly interesting. Amid the chaos of the lines, they all portray very strong and distinct expressions. With Raskolnikov specifically, one can see expressions ranging from distrustful annoyance, to panic, to what appears to be genuine remorse or sorrow. While likely unintentional and just a component of the medium, the lack of colour helped to highlight this.

On to the painter, Max Burchartz: he created the featured lithographs in 1919 upon his return from World War I. Following this, Burchartz went on to work in advertising, creating new methods of typography. He once again enlisted in the military in World War II. Following the end of the war, he went on to cement hisprominence in early modern art and design.

In the display case Sabine Meier’s Rodion Romanovitch Raskolnikov: Portrait of a Man, captures the eye in its sharp angles and vivid intensity. The face of Raskolnikov is entirely exposed as every angle is shown over two pages of a photograph in the book. This imposing portrait allows for nothing to be hidden on the face of Raskolnikov. In relation to the novel a clear connection between the many faces and many angles to the same face of Raskolnikov emerges from the display photograph. In the novel the reader as well as the characters in the novel never find out who Raskolnikov is in his entirety. The question of his motive to murder, his sanity, his faith, and love are covered by authorial silence or only brief glimpses into each of these facets of Raskolnikov’s life. Like the novel, this picture only shows small portions of Raskolnikov’s face at a single time. The viewer is forced to piece together the fragments in order to fully see his portrait. It is this schismatic representation of Raskolnikov that stays true to the novel even in a modern urban setting. Meier chose to use New York and le Havre as the setting of her photos[i]. A selection of Meier’s photos have been printed and are being displayed as an exhibit at the Knockdown Center in New York. The exhibit attempts to “capture the inner workings” of Raskolnikov. Meier’s use of dark colours and shadows in many of the images reflects the novel’s fixation on night time and darkness especially surrounding Raskolnikov’s ventures around Petersburg at night.

Virginia Woolf and the Russian Point of View by Roberta Rubenstein

The item that I found most interesting within the Dostoevsky exhibit was Roberta Rubenstein’s Virginia Woolf and the Russian Point of View. Virginia Woolf has always been one of my favourite authors and so it was extremely interesting to discover that she was inspired by Dostoevsky and to connect her writing to the writing and ideas of the literature we have been working with in class. Before researching the actual book, I thought it would be helpful to verse myself first on the subject matter, and what I learned was that while the text was written about the way in which Russian authors influenced Virginia Woolf’s creative process and subsequent writing, Dostoevsky was the one who appealed most to her. She thought “Dostoevsky’s novels seem to have “permeated” the realms of both literature and psychology, and she viewed readers as having somehow internalized the significance of his novels.”[ii] That sentence show the profound effect Dostoevsky had on Woolf and it is analyzed in Rubenstein’s book, “It’s like peaking over the shoulder of a great writer reading.”[iii] The book shows the connecting themes of the two writers, and how they “sought to open up the world within.”[iv] The biggest take away the book gives is “prodding a reader to go back and reread Woolf in the company of these Russians,”[v] and that is what resonated most with me; to be able to go back and read her work with new significance, and to fully realize the scope of Dostoevsky’s influence.

I chose to write about the Русский Вестник item because I found it the most intriguing one. My main reason was because I wanted to know where Dostoevski first published his stories. I was always curious as to where famous writers initially started publishing their stories, and how it helped them gain recognition for their work. I found it interesting that not only did the Русский Вестник publish several stories of Dostoevski that are considered to be one of the most popular ones in today’s world, but also several other notable and famous work from Russian authors. I was surprised to see that the stories of Turgenev, Tolstoy, and Leskov were also published in the Русский Вестник in the 19th century. Some notable stories which I consider to be outstanding are Ana Karenina, War and Peace by Tolstoy, Fathers and Sons by Turgenev, At Daggers Drawn, and The Sealed Angel by Leskov, and of course Crime and Punishment, The Idiot, Demons, and The Brothers Karamazov by Dostoevski. Another interesting fact is that the newspapers motto is ‘Кто любит Царя и Россию, тот любит Бога’, a motto I personally agree with and support. Some of the main topics that the Русский Вестник concerns itself with are the rebirth of Orthodoxy in Russian, Cossacks, the history, economics, health, science, school and education, army, and politics in Russia. One of the most interesting topics they also deal with is Slavic brotherhood, a theme I am personally interested in. A rather controversial topic they also dealt with were reunions with ‘Little Russia’ which would be Ukraine and Belarus, given the argument it would be a ‘legitimate union of unjustly separated people’. Since 1991 Русский Вестник is funded by a charity foundation called “International Fund for Slavic Literature and Culture”, and the editor in chief from 1991 to 2013 was Aleksei Senin. The current publisher is Oleg Platonov who resides in Moscow. The original location of Русский Вестник was St. Petersburg, the hometown of Dostoevski, however now the journal has moved to Moscow.

[i]  There’s an explanation of the exhibit here.