Lonny Harrison is an incoming Associate Professor at the University of Texas at Arlington. His book, Archetypes from Underground: Notes on the Dostoevskian Self, was published by Wilfrid Laurier University Press in May 2016. 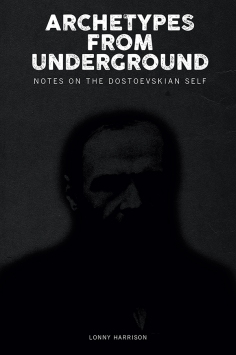 Q. Archetypes from Underground gives its readers a new way of understanding Dostoevsky’s characters. Why do you think we need a new way of reading them?

There are so many ways of reading and understanding Dostoevsky. Like many others, I am interested in the psychology of his characters: the dreamers, criminals, murderers, thieves, the downtrodden and abused, visionary prophets and amoral nihilists, the list goes on… Dostoevsky’s great talent was his facility to dramatize the emotional and psychological lives of such a diverse cast along with their weighty psychic load. But I have always been unsatisfied with the clinical approach, that is, treating them like patients in therapy. From the Vienna school—Sigmund Freud, Otto Rank, and others—to more recent studies, there is a whole industry that thrives on analyzing Dostoevsky-as-psychologist. While that can be productive, I prefer the classic studies by Nikolai Berdiaev and Vyacheslav Ivanov, who treated Dostoevsky’s writing in mythic terms, which is more the way I see them. We should remember that Dostoevsky wrote, “They call me a psychologist: it is not true, I am only a realist in a higher sense,” and also, “My idealism is more real than their realism.” One of the things I do in this book is bring a new definition of Dostoevsky’s underground. In brief, the underground is the realm of the unconscious, or it can be “conscious inertia” as the Underground Man calls it. I write about the underground as a transformative principle. It is the nexus where the unconscious meets the conscious mind, causing friction that erupts into clusters of ideas, or patterns of action and behavior. These patterns that emerge are the archetypes themselves. So reading Dostoevsky from an archetypal perspective opens his works to a better understanding of the dynamic qualities of his characters and situations, all responding to the crisis of modernity and the problem of the modern self.

Q. What exactly do you mean by archetypes? What are Dostoevsky’s main archetypes?

Dostoevsky stated on several occasions that he was interested in creating character types. He thought Mr. Golyadkin in The Double was his first and most important underground type; later in the preface to Notes from Underground, he said, “types such as the creator of these notes not only could, but are bound to exist in our society.” Already in these works, however, it is apparent that he means something more than social-cultural types. Even in his earliest writing in the 1840s, that is what sets him apart from the Natural School. As a realist writer, he worked with social-cultural types, but as a “realist in a higher sense,” he worked in the realm of archetypes. From the underground type to the Karamazovan nature, Dostoevsky’s types are archetypes. In fact his final novel is the culmination of a whole cluster of archetypes he had been writing about all through his works. In the preface to The Brothers Karamazov, the hero Alyosha Karamazov is called an “odd man out”—an atypical hero, indeterminate, undefined—yet one who bears within himself the heart of the whole. Looking at the archetypes in characters like the Underground Man and Alyosha and his brothers brings to light the fact that, contrary to popular belief, archetypes are not fixed patterns, but very dynamic expressions of the ever- evolving psyche in its myriad forms. Dostoevsky’s stories are embodiments of the cycles of myth that code the experiences of the average human psyche in its dialectical phases of development. All archetypes have a positive and favorable side that points upward as well as a partly negative and unfavorable, partly chthonic side that points downward. Dostoevsky’s underground is the territory of this downward-pointing dimension, the subterranean, the unconscious. Its opposite is the upward-pointing process of transformation, numinous experience, and discovery of authentic self, which is also his terrain.

Q. Is this binary ever overcome?

Yes, in a sense it is, inasmuch as it works as a catalyst for the coincidence of opposites that produces transformation. We have to recognize that the idea of ego transcendence is so important in Dostoevsky. One doesn’t always think so when we read about the doubles, devils, criminals, etc., that are so frequently met. There are no perfect saints either, of course. Prince Myshkin is not the Christ figure some have made him out to be, and Alyosha confesses that he, too, possesses the earthy Karamazovan nature. But what sets them apart is that Dostoevsky makes them vehicles of the transformative process of the psyche. More than others, they overcome the qualities of egotism that bring chaos to the lives of most of the characters around them. You might ask, so what is ego transcendence, what does it look like? Well it is a variety of things; for one, it is the moment of epiphany, a sudden insight, or fleeting, ecstatic vision. These moments abound in Dostoevsky. The story “The Dream of a Ridiculous Man” is based on just such a transformative vision in a dream (although the lived experience in the dream seemed to occur over a span of eons). It also relates to the concepts of direct experience, spontaneity, and “living life” [zhivaia zhizn’], terms Dostoevsky frequently employed. It is probably encapsulated best in the sermons of Alyosha’s spiritual mentor, the elder Zosima, which give the experience of inner illumination of authentic self its most direct expression. Actually the passage where Zosima is lying in state and Alyosha, holding vigil, has his dream about the miracles at the Wedding at Cana, simply abounds with archetypal imagery, symbols of alchemy, and mystical transformation.

Q. What question(s) first inspired you to write this book?

I’ve been interested in the idea of doubles in Dostoevsky for a long time. It led me to the principle of the complementarity of opposites, which harkens back to ancient and medieval sources like Hermeticism, Neoplatonism, and Western esotericism. Berdiaev was the first to write about it in Dostoevsky. Following the thread, I found that Dostoevsky’s doubles, and many of his themes more broadly have a lot in common with the work of C.G. Jung. In fact they shared several common sources. Both Jung and Dostoevsky drew on German Romanticism, especially Schelling and Carus, for whom the psychology of the unconscious resonated deeply. I also became interested in the idea of the modern self, especially reading Charles Taylor’s Sources of the Self, and A Genealogy of the Modern Self by Alina Clej. I was intrigued by the idea that the self as we know it is not a static thing, that it has an evolutionary heritage, and I saw Dostoevsky’s writing as occupying an important place in that heritage. I wanted to write about the notion of self in Dostoevsky in order to help in our understanding of the modern self in all its fascinating complexity. I was tantalized by the same questions that seem to tantalize and taunt his characters: What drives them? What do they believe? Who are they? Where is their soul? So I began to think to myself, what is the Dostoevskian self?

Q. Dostoevsky’s books are riddled with doubles. Can we be sure that a single Dostoevskian self exists?

That’s exactly it. There is no monological self in Dostoevsky. That’s why I see the Dostoevskian self as an archetypal patterning. The double is the principle of the unconscious mind meeting the conscious mind. It’s a catalyst for transformation. So I’m mostly interested in how Dostoevsky’s fiction signifies the archetypal source of self, residing in the unconscious. It has potential to inhibit self-awareness and cause personal destruction—in characters like Mr. Golyadkin, the Underground Man, or Stavrogin, but also to enhance self-knowledge and achieve self-integration, as Myshkin, Alyosha, or the Ridiculous Man begin to do.

Q. What were your favorite parts of this research?

I really enjoyed working on Chapter 3 “Dostoevsky’s Underground,” and Chapter 4 “Dostoevsky and the Shadow.” They get to the heart of the matter. They combine several of the most interesting ideas that I was researching, like Dostoevsky’s efforts to revise The Double in the 1860s, which he abandoned in favor of writing Notes from Underground. Moving from Dostoevsky’s underground to the notion of the shadow, I study his trademark archetype Karamazovshchina, which translates roughly as “Karamazovism.” I also examine feminine archetypes such as the Earth Mother and femme fatale for these chapters. Other topics are the epidemic of moral and psycho-ideological illness that Dostoevsky believed had infected the Russian intelligentsia, a travesty he paints with apocalyptic imagery, but also countered with the so-called “Russian idea”. The essential point regarding Dostoevsky’s later writing is its nation-centeredness. He locates the ideal of brotherhood and transcendent, unifying love, and harmony in the Russian narod—a subject he writes extensively about in Diary of a Writer. I also like some of the creepier imagery he uses to represent the underground, like spiders and insects, or the decomposition of consciousness that goes on in the post-mortem socializing of Dostoevsky’s macabre tale “Bobok”. I always have to laugh when I read it. As a literary study of the mind and consciousness, Dostoevsky is at his best, using the fantastic and grotesque to stage his “higher realism.” It just doesn’t get any better than that.

To learn more about Lonny Harrison’s research, check out his faculty profile page. You can also follow him on Twitter @lonnyharrison!

This interview has been cross-posted on the UT Arlington liberal arts news website.

This interview is part of a new feature on The Bloggers Karamazov. If you have recently published work on Dostoevsky and would like to be interviewed on our blog, please let us know!